Hi,
I was wondering if it’s possible to mirror in real time the audio/video occurring on the screen of a device (iPad or iPhone, for example). I mean, ANYTHING happens on the device (calls, YouTube warching, cam captures, Spotify listenings etc) using ebosuite

it is possible to capture the screen of the iPhones using eVideoIn device. I think iPads should work as well.
When you connect your iPhone to the computer and confirm that you trust the computer(popup opens on the iPhone), it should show up as a source in the eVideoIn, check the screenshot: Hope it works for you, let us know if you encounter any difficulties.

Hi! You activate the audio of the ipad, as a mac input, if you go to the audio MIDI setup app and press on activate device. You will be able to see your iphone or ipad as input inside Ableton.

Great tip Owen, thanks a bunch!

yes, thank you both for the reply.
i didn’t connect my iphone to the mac for a long time, and now when i plug it it says i need to update my OS to be able to “see” the device…
so, should I update to catalina?!
this is the dilemma, ahahaha.

Are you on IOS 13? I still am on IOS12 on my Ipad and Iphone and those work great on Mojave I suggest the following:

Let me know how it goes!

yes!
Thanks, now it works, i can replicate the video but when i go to the audio MIDI setup app and press on “activate device” it activates the audio but i lose the video mirroring.
so, for now, i think it’s possible share the screen mirroring OR the audio “mirroring”.
@owae.ga, it’s the same for you?
anyway thanks a lot to both!

Hi! I had these issues using my ipad and OBS, too. I discovered that if you select your Ipad as a webcam inside Camtwist app ( http://camtwiststudio.com ), it will allow you to get the audio feed on the computer without activating the ipad as audio input in Audio MIDI Setup app. Just check some of the Camtwist audio parameters if it doesn’t work right away.

I imagine that we can use camtwist as a webcam inside ebosuite and route the audio to soundflower or other routing digital channels to ableton.

Tell me if it works for you too.

Ok, I just tested this out on my macbook:

If I connect the ipad to camtwist as a webcam, I get the image as a camtwist webcam and the audio directly on my main default mac audio output speakers.

If I connect an audio jack to the ipad, I get the audio on the ipad but the image still shows as a webcam on the mac.

Ipad as a webcam in camtwist + cable connected from the jack output of the Ipad to a soundcard.

you’re absolutely kind, owae.ga.
the problem is that fucking new iphones has not separate “ports” for audio aux and device in (you know they use the same “charger” port to do everything.
so i think i simply can’t do what i want to do with this device.
i need an older iphone or an ipad.
anyway thank you a lot, really.

I did a test stream yesterday using this usb/audio method if someone is interested in checking how this could work in a live situation: Hi Owae.ga, thanks for sharing!

Hi guys!
Just an integration,
I’m working mirroring the screen like we have discussed in this thread.
Now the idea is to apply the eloopstutter to the video stream, but it doesn’t work (I think because loop stutter works only with video playing from clips and not streaming?).
If so, do you think there’s a way to reach the same result somehow?

As I understand, cam twist app doesn’t work for iPhones.
Do you know if there is some app that do the same job for iPhones?
My issue is always to get both audio and video of the iPhone’s screen mirrored into ableton.

You can find the iphone screen as a webcam device in Camtwist and OBS. If it doesn’t appear as a webcam, you’ll probably have to trust mac on your phone first. (by opening Itunes and pressing the trust button on the phone I suppose)

The only problem is that OBS doesn’t recognise the audio input from the iphone ( only the image) so, as a work around, I use Camtwist to get the video/audio feed and then I select Camtwist as a webcam in OBS to get the video and audio from it.

Finally not…
i’ve bought 2 adapters and one is not working at all, the other allows me to charge the phone via laptop but, don’t know why, doesn’t show up “iPhone” in the e-videoin options… 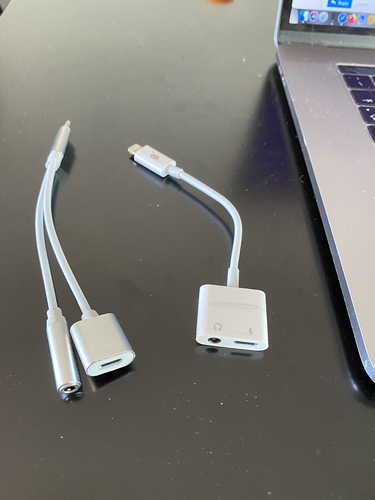 Oh… It seems to be a charging port only. Do you still get video feed using only the lightning cable inside OBS?