I know the benefits of integrated CPU/GPU are supposed to be game-changing for the average user, even with only 16GB on the memory side. Part of what makes this harder to parse for pro use is that many of the benchmarks are focused on gaming rather production tools like Ebo, Max, Premiere, etc…

Can any of the M1 variants replace or outrun a 32 GB machine with a dedicated eGPU like mine for production applications like Ebo?

Any guidance (especially IRL) is helpful!

Hi Jeff, I have no experience with eGPU, but I have been using a MacBook Pro with M1 Max chip for a while now and I am very happy with the performance. The ProRes codec performs much better as well. That is similar to Hap now.

Update: I went ahead and bought a base-model Mac Studio Max.

Testing against the Intel Mac Mini with eGPU, the Radeon card still outperforms the M1… at least according to Activity Monitor and GPU History window. Depending upon the test, the Radeon outpaces the M1 by anywhere from 1.5x to 4x.

So far I don’t think I’ve actually pushed the M1 GPU to more than about 90% capacity, but I am concerned about being able to live into this machine for projects I haven’t conceived of yet. I’m currently working primarily at 1080p.

BTW, ProRes encoding appears to be much smoother with M1 Max and I’m able to use Syphon again without the audio garbling I experienced on the Intel rig.

Any and all insights re M1 GPU/core usage is greatly appreciated. Thanks!

Hi Jeff, thank you for sharing your experiences. I don’t think the Activity Monitor and GPU history say so much about the performance. It shows how busy they are, not how well they are performing. I think a good, simple test would be to load many ISF shaders (FX and/or generators) and check when you notice the frame rate going down. If you load the same shaders on both systems then that will tell you something about their capabilities and how they compare.

EboSuite uses the GPU fully, so the more cores the better. EboSuite uses one graphic card, so if you add an extra, separate graphic card, then that will make no difference. The GPU is most important, but a more powerful CPU will also help, because the communication with Live, the Max for Live devices and Live itself run on the CPU.

Tracks/channels are processed only when they are active and visible. The number of visible tracks, the number of videos playing, the dimensions of the videos, camera, Syphon stream and ISF shaders, the number of effects (in use), affect the performance. Changing the dimensions/resolution of the videos and ISF shaders is an easy way to relieve the GPU. It differs a lot per ISF shader how demanding they are. That depends on how they are set up and what operations they use. So it is good to pay attention to that.

Thanks for your advice, Jeroen. I will run some of the tests you mention and report back. What I can share so far is that I have a project with 9 layers of hi-res photographic sources, all being processed with various FX—plus some audio tracks—and recording Syphon fine at ProRes 4k 30fps. Sweet!

Is there a real-time method of monitoring FPS, or is it just a matter of evaluating the stats on recordings?

Some audio plugins I use require opening Live under Rosetta. Do you know if/how that impacts Ebo graphic performance on M1 Max?

On my Intel system, it seemed like I had to make the Ebo display window as small as possible when recording smooth 2k or higher via Syphon… but on first tests the M1 Max doesn’t seem to care. Any thoughts?

Hi Jeff,
I also had very good performance playing many hi-res videos at the same time with the M1. Impressive stuff!

We didn’t add an FPS monitor, because it is pretty unreliable data and therefore can be misleading.

I also used Rosetta for a while, because of some audio plug-ins and EboSuite’s performance didn’t seem to suffer. I am not using Rosetta anymore, because I ran into some other issues (I forgot what issues, I’m sorry). So I think it is best to avoid running in Rosetta, but I don’t expect issues with EboSuite.

When you use Syphon you could consider setting the output window size small and the render resolution high. The Syphon output will be hi res then, while the output window will take up little resources. I am impressed by the M1 Max’s performance, so I can imagine that this is less of an issue with M1 Max.

But then I tried upping the render output to 4k… but the resulting movie is still 2k. Screen shots attached. My source vids are 2k but I assume that render output is separate from that. 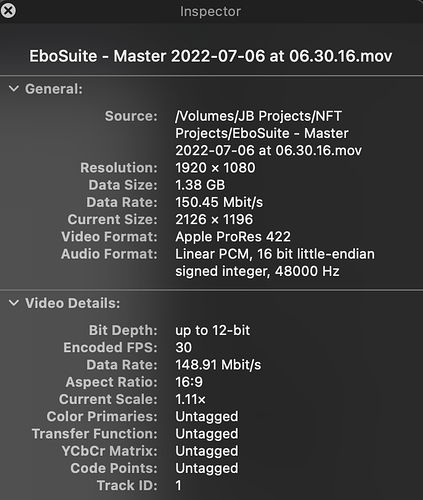 Hi - can I ask what software you are using to record your output from EboSuite?

Thanks for asking jiiitro. I’m using Syphon and… well this is embarrassing: I had Syphon prefs overriding at 2k rather than Match Source. (Insert sound of palm smacking forehead!) Crisis solved on the World Crisis Monitor!

As an update, the same M1 Max GPU stress test came through with flying colors recording at 4k. I’ve now officially committed to the M1 Studio Max base model and selling off my eGPU-based rig. There are still some rough spots with a zillion apps and plugins since this is my Pro Tools and Live music production system as well… but worth it!